Where to buy a good panettone in Milan 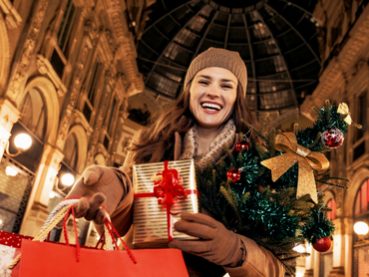 Milan, the home of panettone: where to buy it

In Milan there is only one Christmas cake: the famous panettone.

With a centuries-old tradition, this cake owes its name to a mythological apprentice, Toni. Various legends tell the story of Toni and the creation of panettone: the two most accredited ones see him at the court of Ludovico il Moro or working in the oven of his father-in-law, the father of his beloved Algisa. The young apprentice, in his kitchen, designed and made a special “bread”, embellishing it with butter, sugar, eggs, sultanas and citron peel, surprising and delighting the palates of all fellow citizens, literally crazy about the pan di Toni.

The recipe of the artisanal panettone has been handed down over the centuries from generation to generation and from shop to shop, and today this cake is a real must for Christmas in Milan.

Here is a list of the best pastry shops where you can buy the best panettone in Milan:

Cova is one of the most famous pastry shops in Milan. It was born two hundred years ago as a literary café and this atmosphere can still be felt today between its walls. Panettone, sold all year round, is the spearhead, both in the traditional version and decorated in various ways. If you want to buy a classic Milanese panettone, choosing Cova you can’t be wrong.

This is another historical pastry shop, in the central area, which even recalls the name of the patron saint of the city. Its panettone is a great classic for many Milanese families, and you can order it customized according to taste and preference, from panettone with pineapple to panettone with chocolate and pears.

A very elegant Milanese pastry shop with a two-centuries tradition. It uses a secret recipe studied for a long time, with the exclusive Marchesi mother yeast and raisins with six crowns. Not to be missed for lovers of this traditional Christmas cake.

The symbol of this pastry is the classic Panetùn de l’Enzo with chocolate and apricot jam, created by Maestro Vincenzo Santoro. Here you can find variants for all taste. The novelty of 2018 is the delicious panettone with gianduia and mandarin.

A place of worship for Milanese lovers of gastronomy and true gourmands since 1883, panettone is available every day of the year at Peck’s too. The variant with orange, pineapple and ginger is remarkable.

The pastry shop of chef and maitre chocolatier Ernst Knam offers every year, among the dozens of delicious Christmas creations, a different “Knamettone”: the 2018 edition includes a cover of chocolate and sandblasted almonds and an interior with semi-candied pears and dark chocolate from Peru.

One of the most particular ideas of this pastry shop is “panettone for two” in a glass jar, available – like the classic one – in different versions: coffee and blond chocolate, strawberry, ginger and Tonga beans, with four chocolates and vegan.

Following Angelo Vergani’s secret recipe, since 1944 this pastry shop has been making panettone by hand, even at an industrial level: in fact, over 600,000 panettones are produced every year. The most particular variants are with saffron, gluten-free and with wholemeal flour.

In this pastry shop, founded in 1945 thanks to Angelo Bernasconi, panettones are hunging from the ceiling all year round! Worthy of note are the versions with pistachio cream, marrons glacés, chocolate and ginger and white chocolate and raspberry.

Milanese pastry shop born in 1961, it creates its panettone with more than 30 hours of processing: in addition to the traditional variant, you can taste panettone of the Sultan, the one with chocolate drops and the one with ginger candied, stuffed or covered with chocolate.

A historic and unmissable shop for chocolate lovers, at Zàini’s you can buy the classic panettone and place it in a basket or in a box along with other Christmas delights, such as the chocolate tree biscuit: a perfect gift idea for the greedy ones.

A Milanese pastry shop founded in 1936 and sending its products all over the world: it creates the classic panettone also with candied apples and cinnamon, candied pears and chocolate and a version of panettone called Cecca, with sour cherry.

To move easily between the various pastry shops in Milan, transporting without effort kilos of excellent panettones, you can decide to use a rental service with driver such as the one offered by Eurocar Limousine.

The airports of Milan: useful information
10 December 2018
Go to Top
Our website uses cookies to offer you a better browsing experience. Cookies allow us to count visits anonymously and do not allow us in any way to identify you personally. Learn more by clicking on More info and discover how to reject cookies, in part or in total. If you scroll the page or continue the navigation you accept the usage of cookies.OkMore