What to do in Milan on rainy nights 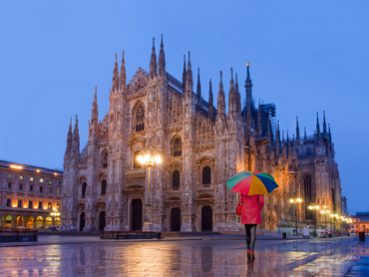 Milan is often described as grey and rainy.

Those who live there or go there often know well that it is a city that can surprise anyone with its blue skies and its breathtaking sunsets. Many times, however, the stereotype is confirmed and you are forced to spend entire days between umbrellas and puddles.

Especially in the night, rain can be an obstacle to spending a pleasant moment away from home. Do not give in to melancholy and laziness! Milan has wonders to offer, becoming even more romantic and fascinating.

So here there are seven things to do in Milan when it rains at night:

1. Watching a film at the cinema

A great timeless activity for rainy nights: what could be better than enjoying a good film with friends, your sweetheart or, why not, even alone, sunk into the comfortable armchairs eating popcorn? There are so many options in Milan by now: from the huge multiplexes, which also offer restaurants to dine without moving and shops to go shopping, to the most historic cinemas in the city such as the Anteo, now Palazzo del Cinema, and the former Odeon, now The Space, right next to Duomo.

Rain can make Milan an even more enchanting location for a candlelight dinner with your partner. You’ll be spoilt for choice among the city’s countless bars and restaurants: in order to spend a truly unforgettable night, however, you can opt for a dinner in the first international hub of gastronomy, Identità Golose Milano, just two hundred meters from Teatro alla Scala, or in one of the several starred restaurants in the city. Among these, Joia by Pietro Leemann stands out, offering only vegetarian haute cuisine.

Every now and then you should take some time for yourself and dedicate yourself to a relaxing cuddle: so, why not spend a night at QC Terme in Milan? The structure, in the heart of Porta Romana’s district, offers two different evening entrances to enjoy all the benefits of the wellness program (hammam, sensory tubs and whirlpool, relaxation rooms for color therapy and aromatherapy, massages of all kinds) and a rich and exclusive aperitif buffet. Curiosity: you can immerse yourself in the only bio-sauna in the world built in a tram!

Even in Milan and under the rain you can remain in contemplation of a starry sky! Just go to Planetarium, inside the gardens of Porta Venezia, to attend shows and conferences on constellations and celestial bodies, able to enchant both adults and children.

Why not take advantage of the rainy night to hide in a theater or a place to enjoy a nice concert? Here, too, Milan offers countless possibilities, from classical music performances at Teatro alla Scala or Auditorium LaVerdi to a wonderful selection of jazz artists from the elegant Blue Note, in the heart of Isola district.

Milan is well-known, among other things, for its rich theatre season: a show at Piccolo, Strehler or Elfo Puccini, Carcano, Litta, Teatro Nuovo, Dal Verme, Franco Parenti, or a musical at Teatro Nazionale or Arcimboldi is certainly a winning idea!

7. An exhibition or a museum

It is possible to visit exhibitions and museums in the night on different days of the week, thanks to the extension of the opening hours: it is thus possible to spend a pleasant night at Palazzo Reale in one of its various exhibitions, or visiting the exhibitions of Mudec – Museo delle Culture, Museo del Novecento or Pirelli Hangar Bicocca.

To avoid going around the city with annoying dripping umbrellas and returning home wet, you can choose to use a Eurocar Limousine rental service with driver to enjoy only the best of an evening in Milan.

A two-days visit to Florence
17 December 2018
Go to Top
Our website uses cookies to offer you a better browsing experience. Cookies allow us to count visits anonymously and do not allow us in any way to identify you personally. Learn more by clicking on More info and discover how to reject cookies, in part or in total. If you scroll the page or continue the navigation you accept the usage of cookies.OkMore